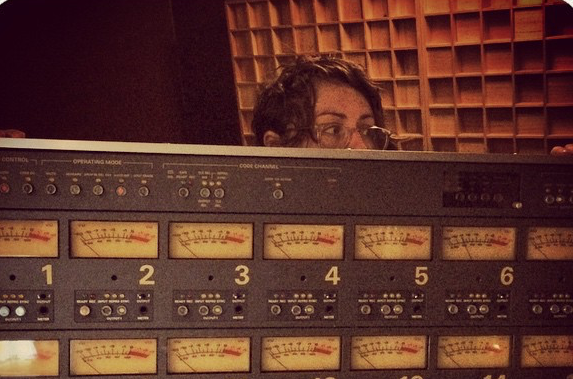 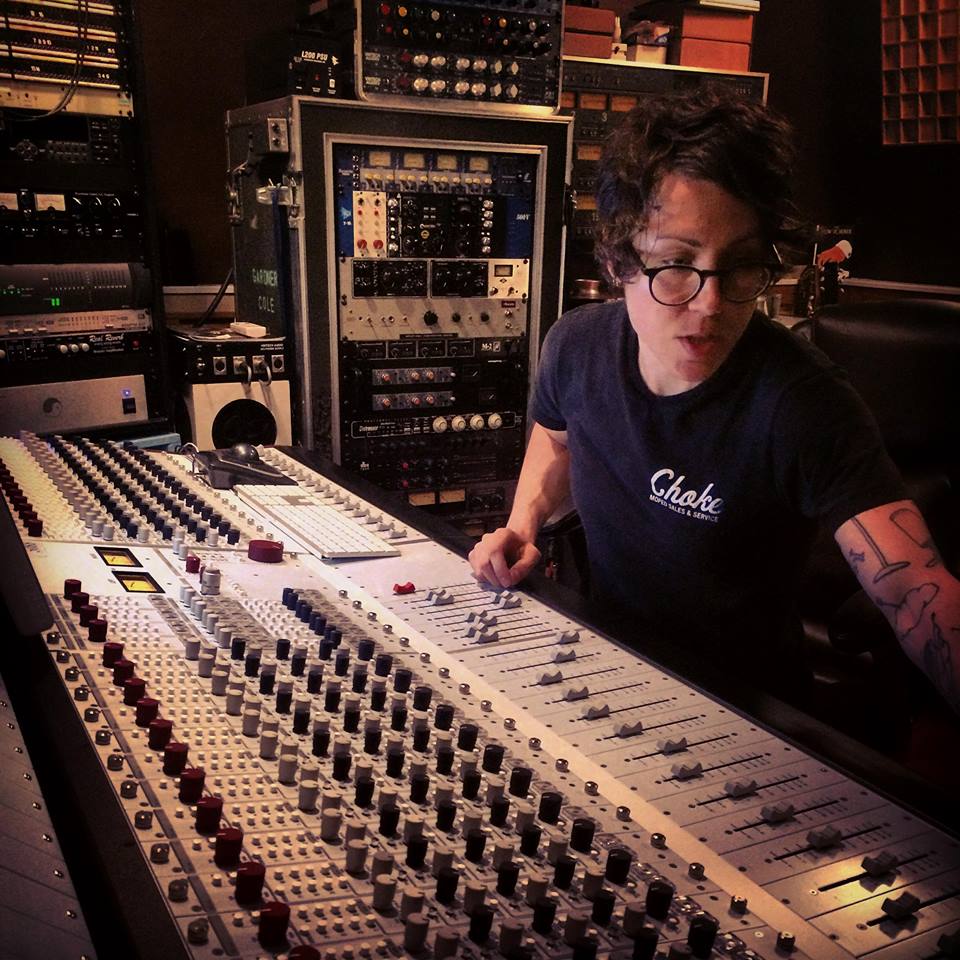 Owner and engineer at Five Thirteen Recording in Phoenix, AZ, Catherine describes herself as “more or less an analog purist.” She also co-edits pinknoisemag.com, which is dedicated to increasing the diversity of voices speaking about recordmaking and to fostering an intellectual tradition to accompany the practice of recordmaking. 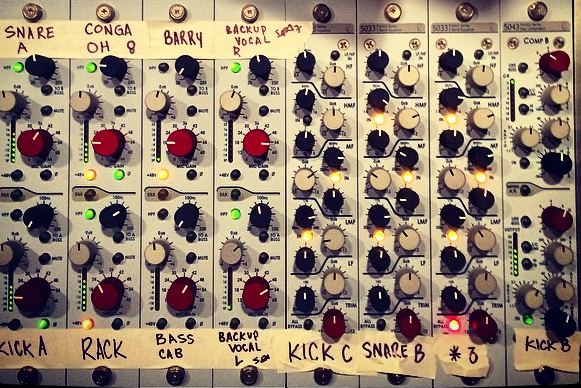 1 – On your 513recording.com bio, you’re listed as “more or less an analog purist”. What is it about analog that you find so attractive?

Catherine: So many things… The most important of which have to do with simplicity, tactility and human interaction. First, the digital domain has given us so many options. Too many options really when you think about it. Unlimited tracks, plugins, and editing possibilities tend to breed mediocrity. Very little is destructive, so engineers get lazy. Musicians get lazy. Not purposefully, but almost automatically. Why take the stairs when there’s an elevator? The stairs are better for our bodies, but the elevator is easier. Faster. I suppose when I take the stairs, I feel like I’ve accomplished something. And how much simpler it is!! There are no pulleys, electronics, or weight limits. Just good old fashioned human kinetic energy. Digital audio for me is an over complicated, over compensating, elusively expensive, “fix it in the mix” copy of the real thing. It’s an ‘elevator’ that gets the job done- that is if nothing in that complex system goes wrong. For me, nothing beats a console and tape machine. Simple, and a lot of the time more reliable. Second, the analog domain is almost completely tactile. It’s an enviorminent full of things that you can see and touch. There’s not much to ‘look at.’ Just faders and meters and the people in the control room. We are forced to use our ears for hearing and our hands for working. So often these days we default to our eyes and our cursors. The further we move away from this tactility, the less real things seem to me. That’s not to say that I don’t use ProTools- I use it almost every day, but I don’t enjoy it nearly as much as a reel of 2” tape! Finally, I find that digital audio takes away from the human connections that exist in the studio. It’s much more difficult for a musician who has little DAW knowledge to grasp what it is an engineer is actually doing when all they see is clicking and dragging. We’re focused on a computer screen sized space between our monitors, which means less eye contact with our clients. I think this creates a kind of disconnect that doesn’t exist in an all analog or mostly analog session. The experience of analog is strangely fulfilling in a way that is difficult to explain not only for us, but also for our clients. It creates an habitat where by default people are better prepared, produce better performances, and make all around better records. 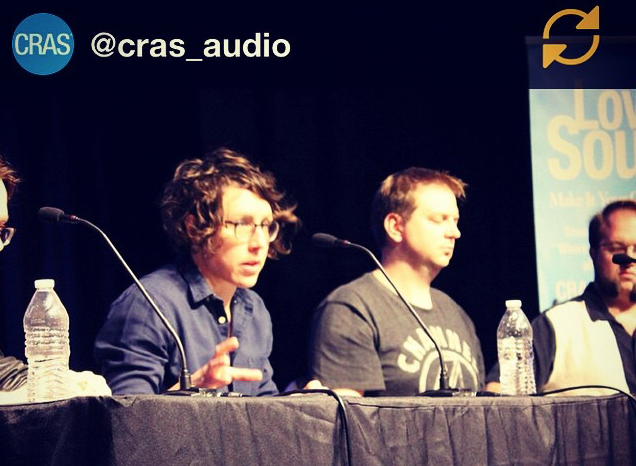 2 – You refer to your time at the Conservatory Of Recording Arts & Sciences as a “crash course” because you had zero experience or exposure to audio equipment or terminology prior to attending. In your own words, you’d never even seen a console. Obviously times have changed, and information is far more widely available for young engineers. If you were in the same shoes today, would you still have still gone to a trade school to learn audio?

Catherine: Absolutely. There is no substitute for hands on learning from skilled and experienced professionals, just as there is no real substitute for an analog console or tape machine. That’s not to say that one is more likely to get a job in the industry solely based on a trade school education. It’s more difficult now than ever to find employment as the industry continues to depend more and more on computers and algorithms rather than human beings to get the job done. However if one has a desire to learn to be truly competent in a control room, Youtube videos or internet tutorials on ‘how to record music’ or ‘how to use a DAW’ might give someone a great start, but it will provide zero insight into how to deal with people- which is far more important than most studio processes. If we negate the human element from the start, we’re far less likely to understand why people make records in the first place, regardless of which side of the glass we’re looking through. 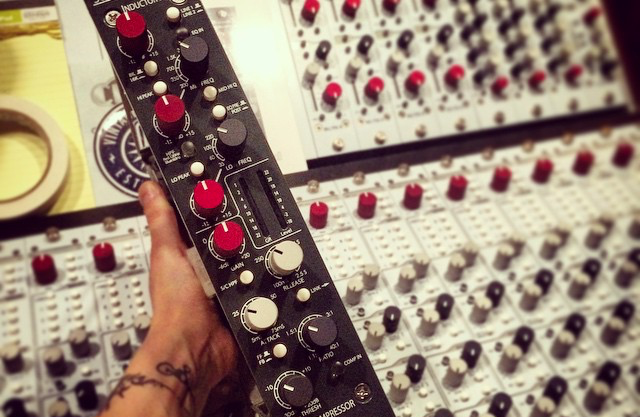 3 – As a studio owner, what advice would you give to the entrepreneurial minded engineers hoping to attain your level of success in the modern music industry?

Catherine: Keep an open mind, and your expectations realistic. ‘Success’ is an evolving concept. What I considered to be success ten years ago is much different than what I consider it to be now. I wanted to make records and I have, but that doesn’t mean I’m successful. I wanted to own my own studio and I do, but that doesn’t mean I’m successful either! Most of what I consider to be successes are little things that have nothing to do with recognition, accolades, or income. They have more to do with being able to adapt to the changes that occur so frequently in this industry while living and working in a city that lacks industry and pedigree. Phoenix isn’t exactly a record making destination, so to say that my studio is going on it’s 10th year in business soon is success enough. Everyone dreams of gold records and Grammy nominations, and while these things are good motivators, they’re not very realistic tokens of ‘success.’ I’d much rather be able to say that most of my studio’s clients are returning clients, and that my staff is a group of wonderful, talented people that support the business and the community. These are things I can say, and that is what makes going to work everyday fulfilling. It’s also imperative that professionals in this industry possess a willingness to learn. No one person knows everything there is to know about making records! As soon as someone is disinterested in being exposed to something new, or is close minded about methods or ideas, I think the possibility for ‘success’ goes right out the window. I learn something new every time I get behind a console, or sit in on an assistant’s or visiting engineer’s session. If I’m not learning, I’m not progressing, and if I’m not progressing, I’m not successful. 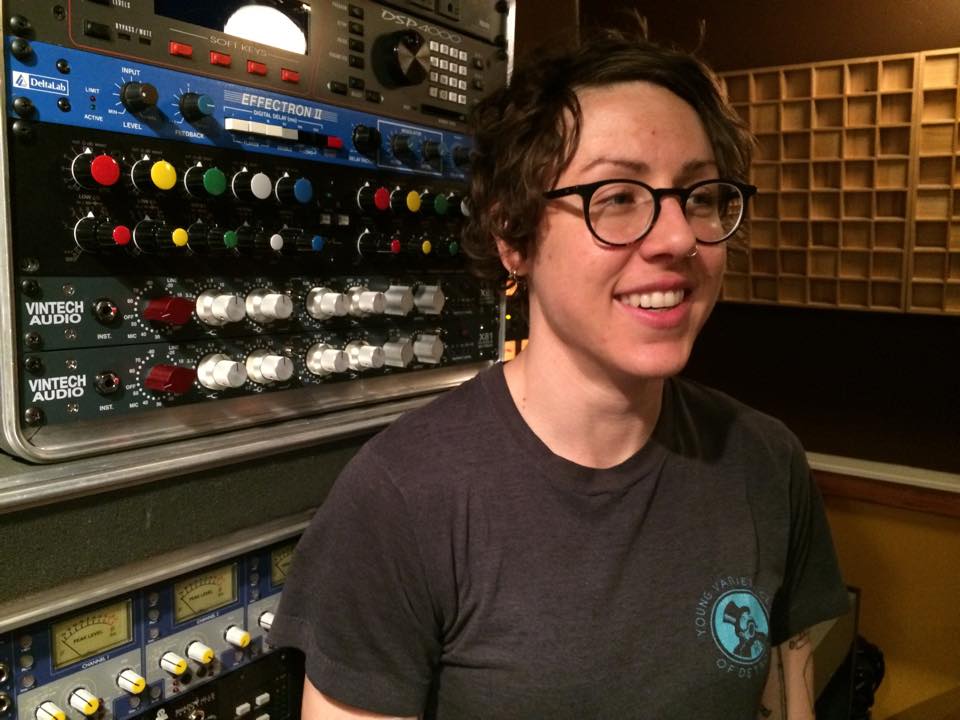 4 – What was it like to be thrown into working with Megadeth while still learning your way around pro tools?

Catherine: Every internship has it’s panic-ridden fly-by-the-seat of your pants moments, and mine was no exception. Because I was still a student, I had to depend more on my people skills than my engineering skills to get through. Working with Dave Mustaine was a unique experience because it was a very small group of folks remastering all the band’s Capitol releases. There were 3 ProTools engineers, 1 studio engineer, 1 chef, and 4 interns. Our intern responsibilities ranged from food runs and moving around hard drives, to picking up various members of Megadeth from the airport. We didn’t get a lot of hands on ProTools experience since there were designated engineers hired to edit and mix, but we did get a bunch of over the shoulder tips and tutorials- often from Dave himself, who was a big fan of the “new software program” at the time. (back they were working on ProTools 5) It was an intense experience, but I very quickly learned the most important things about being in a control room: When to talk and when not to talk, how to simultaneously anticipate the needs of multiple people in a group, and how important a sense of humor can be. I also had to get over my childhood self continuously thinking “Holy shit that’s Dave Mustaine..” 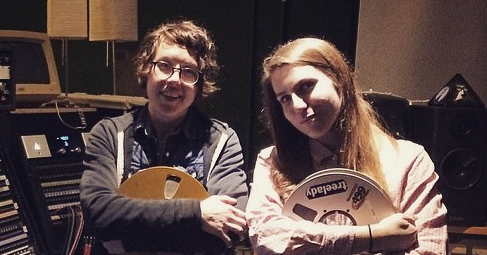 5 – As a contributing editor for PinkNoiseMag.com, you bring to light the issues of inequality that face women in the audio industry. What advice would you give to young female engineers about how to approach this largely male-dominated industry?

Catherine: This is a great question that I don’t think is asked enough. Women only represent 2-5% of the Pro Audio industry in 2015, which is pretty pathetic when you consider the coed state of other technical industries. As for the reasons for this staggering statistic, there isn’t one specific cause, rather many contributing factors which include the ‘chicken and the egg’ viewpoint- or more specifically that there are very few women in audio, because young women are discouraged initially from getting involved in a community or climate where few women exist already. The remedies for this conundrum are also difficult to define, but there is no substitute for encouragement and equal opportunity! With that being said, my advice is really no different for young women than it would be for anyone else. It’s tough to get by in Pro Audio anyway, especially as a fresh face in a studio or a live sound setting. It requires a tough skin, a willingness to get the job done no matter what the significance, and an unwavering sense of determination. This is especially true for young women. As minorities in the boy’s club, I think that women often forget their advantages. Women tend to think, work, and even hear differently than men. They also have a different approach when it comes to dealing with people, which is invaluable in a creative environment. The key I think is to find a place to exist where these advantages are appreciated, even if that place has to be created or constructed. This is especially true for myself. I didn’t feel as if my talents or what I had to bring to the table had an opportunity to flourish in the places that I was being exposed to at the time, so I built my own with Fivethirteen. Granted this is an exaggerated example, but the moral of the story is that it may take a few years to find the right fit. So many young folks get discouraged after their first bad experience. Especially women. Just because that particular place or job wasn’t the right spot for someone, doesn’t mean that it isn’t out there. So basically – stay vigilant kids.